It’s been over two years since I posted on this blog. This is probably a sign of just how busy I’ve been as each season seems to blur into the next more each year, but I’ve resolved to put more effort into things for 2019 and have formulated a plan to post a new blog, with all new photos, each weekend throughout the year. I’m hoping it will give me a chance to share more than just the event photos that are the mainstay of the “sales” pages of this site.

As some of you know – especially those who follow me over on twitter – I am fortunate to have the opportunity to photograph an assortment of fun items from the worlds of scifi, fantasy and tabletop gaming. (I am proud to be something of a geek and the 25GB subfolder of photos on my server titled “Geekery” is testament to this.) I usually share these images via twitter and they’re also often used by some of the manufacturers to help promote their wares. 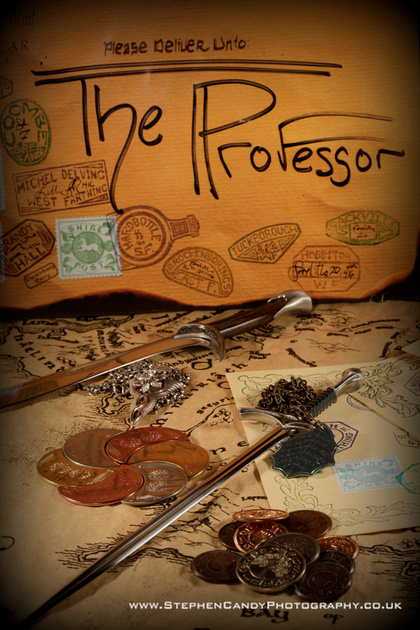 Each weekend I’ll share some new images either of some products from my collection, something new that has arrived, or from a recent event or occasion. For this first week, I thought it would be appropriate to visit the world of JRR Tolkien, since January 3rd was the 127th anniversary of The Professor’s birth. I first read “The Hobbit” aged about 9 and, like so many others, Peter Jackson’s “Lord of the Rings” trilogy remains one of my favourite series of films, one that I revisit often.

The Noble Collection, Shire Post Mint and “Lord of the Rings.” 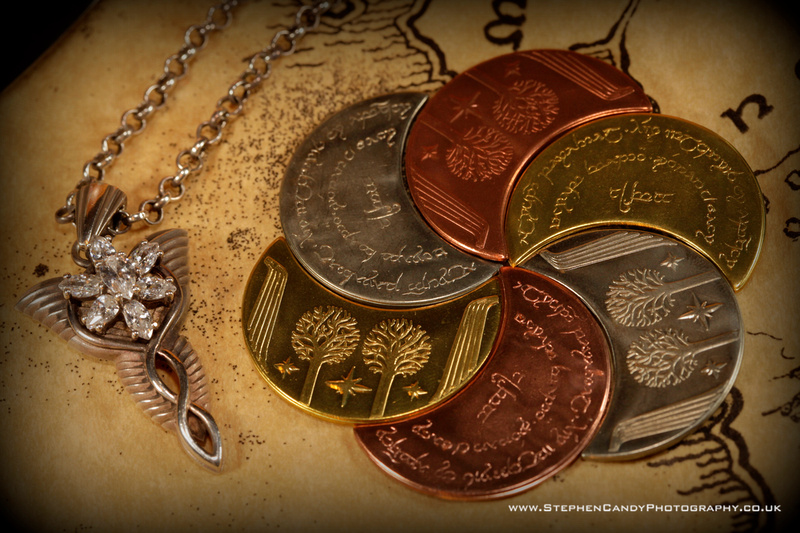 The Noble Collection are well known as the manufacturers of prop replicas from several of the world’s most popular fantasy/adventure worlds, including Harry Potter, Game of Thrones, DC Comics and – of course – Lord of the Rings and The Hobbit. One of my favourite items from their LOTR collection is the replica Evenstar necklace pictured here. 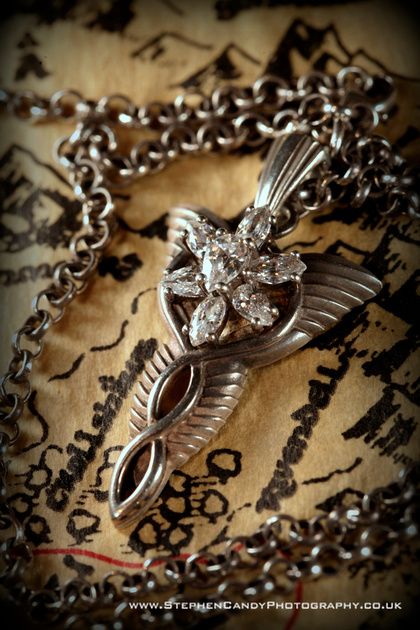 This is an exact duplicate of the one worn by Liv Tyler as Arwen in the films (although in the books there’s no direct reference to a necklace by this name, merely that she wears a “white jewel” on her chest.) Its many appearances in that trilogy make it one of the most recognisable artifacts – and certainly one that is more wearable and portable than a sword! The Noble letter-opener replicas of key swords from the films are just as detailed and accurate whilst being rather less dangerous than their full sized counterparts. (Future weeks may feature images of some of the swords I’ve accidentally collected from other fantasy worlds though…) 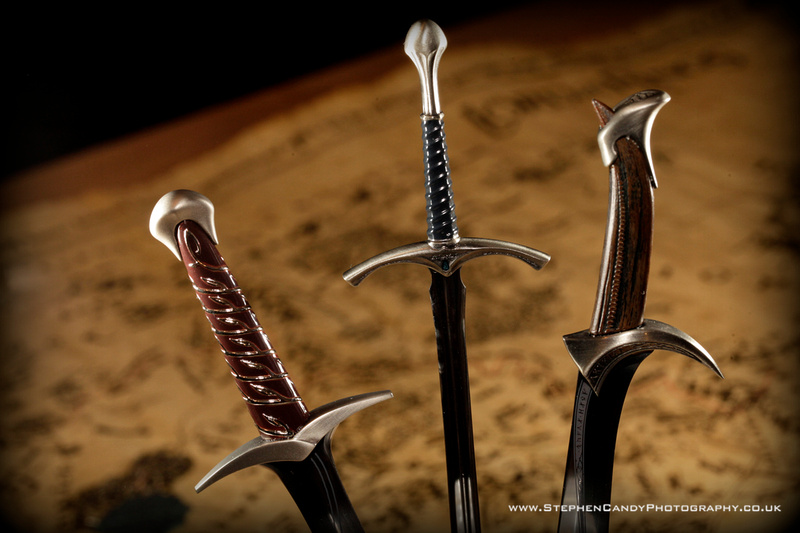 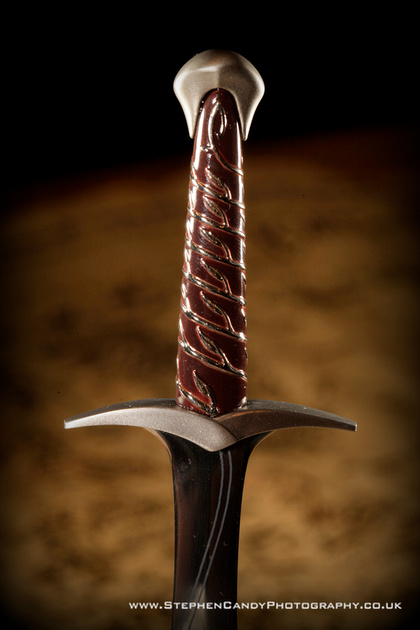 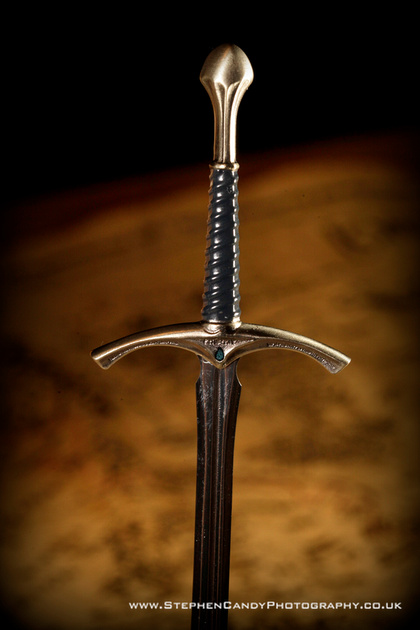 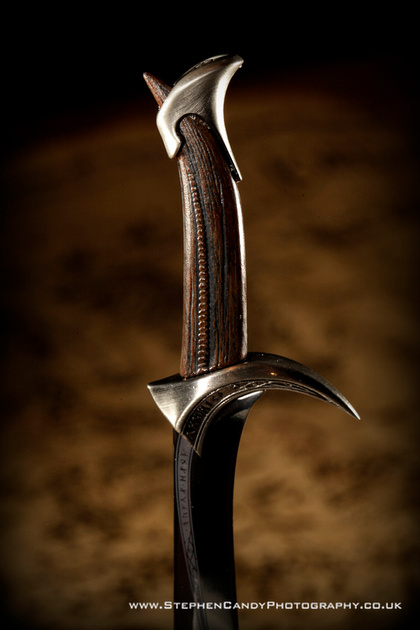 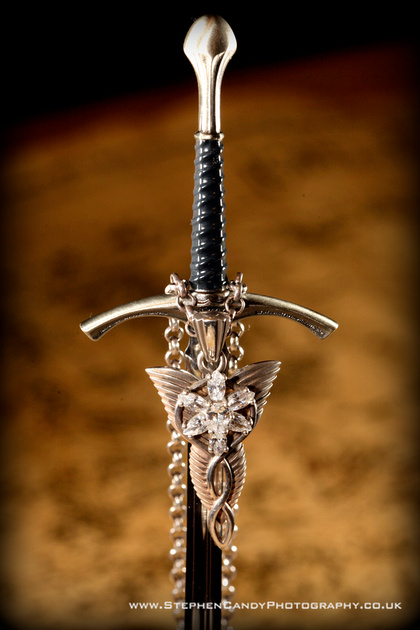 Shire Post Mint are an American family business from Arkansas. The Mint’s founder, Tom Maringer, is a lifelong Tolkien fan and expert. His own fan project creating unofficial stamps of The Shire (hence “Shire Post”) progressed into creating unofficial but much sought after Shire coins using traditional techniques and antique coin-pressing equipment (hence “Shire Post Mint.”) His work is all handmade, a world (and a century) away from the sort of mass produced coinage typical of many games and merchandise items. Before “Game of Thrones” was the international behemoth it now is, author George RR Martin saw Tom’s coins and enquired after having some made to help bring the world of his book “A Song of Ice and Fire” to life. This licence stood Shire Post in good stead when “Game of Thrones” became an international hit. Rather than give the licence for coins to a bigger manufacturer (for potentially bigger percentage return), GRRM stuck to the deal he’d made with them and this raised the company’s profile. (They have a VERY wide range of coins from the series that is well worth checking out, including an amazing Iron Coin of the Faceless man that’s MUCH nicer than what we saw onscreen in the HBO series. Whilst HBO sadly chose not to use the Shire Post coins onscreen I do know that both cast and crew had their coins onset and apparently if you ever meet George RR Martin in person, it’s possible he may even have some with him.) 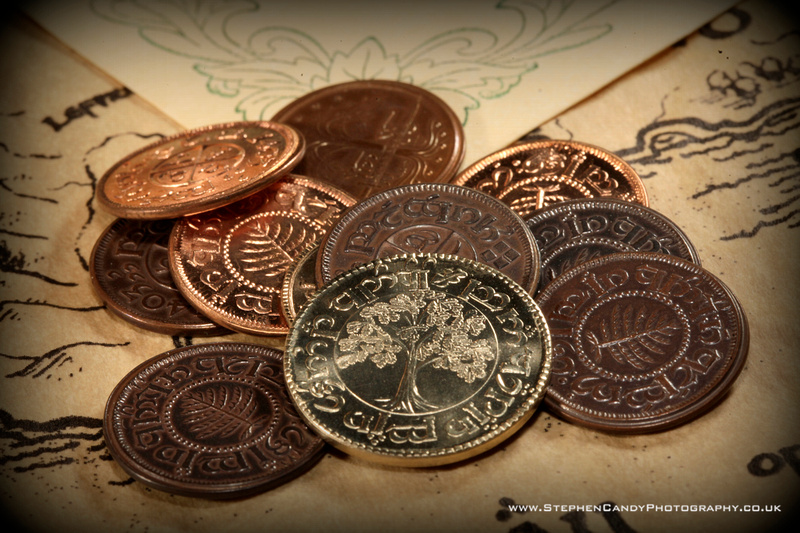 The Shire Post range expanded, as did the company, and now includes other fantasy realms including Robert Jordan’s “The Wheel of Time”, Brandon Sanderson’s “Mistborn”, Patrick Rothfuss’s “Kingkiller Chronicle”, “Conan the Barbarian” and more, as well as a great range of original coins too. (You’ll see more of their work in future blogs.) The firm now encompasses three generations of the Maringer family and what was a part-time hobby has become a full-time job for them all! The story came full-circle in 2015 when Shire Post were finally given a licence to produce official “Lord of the Rings” and “The Hobbit” coins, some of which feature designs inherited from the earlier, unofficial range. (The earlier range remain sought after among collectors and I am delighted to have some of these tucked away in my collection too! Pictured here is an example of just one such coin, appropriate for the occasion of Tolkien’s “birthday” – a Mathom, minted as a special gift for those attending Bilbo Baggins’s birthday party.) 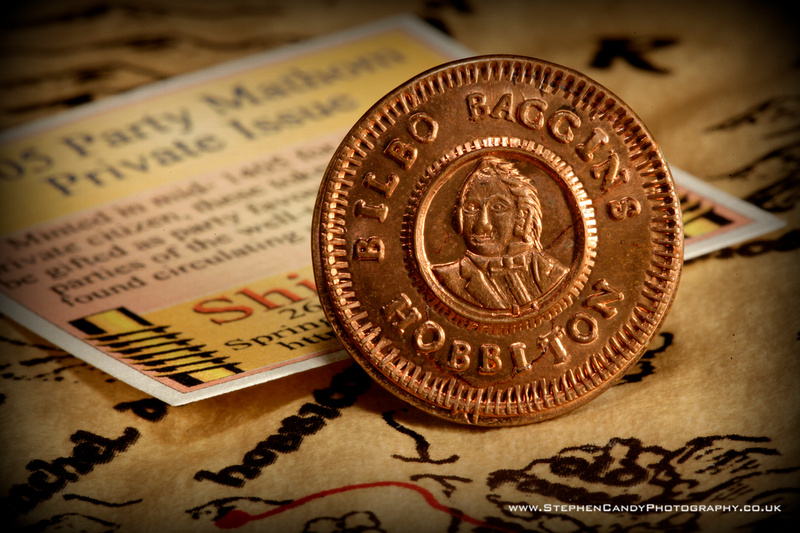 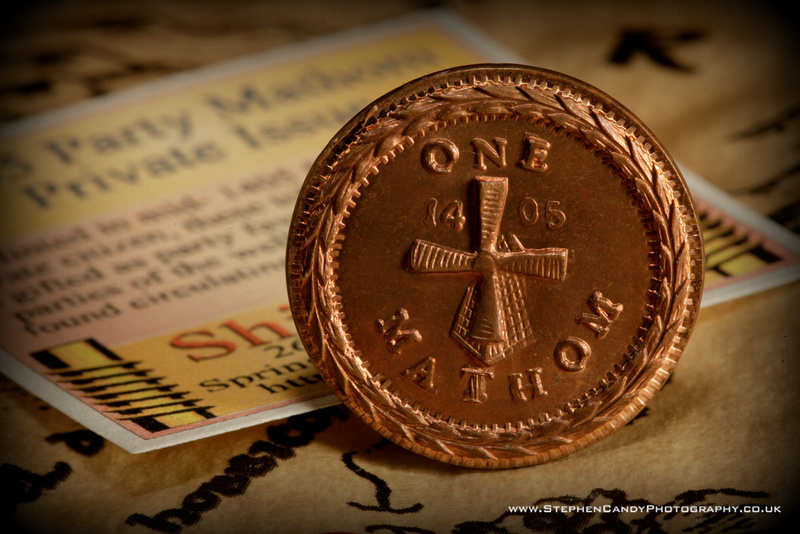 The more recent coins are available from Shire Post both individually or in a set of collections four of which are shown here. 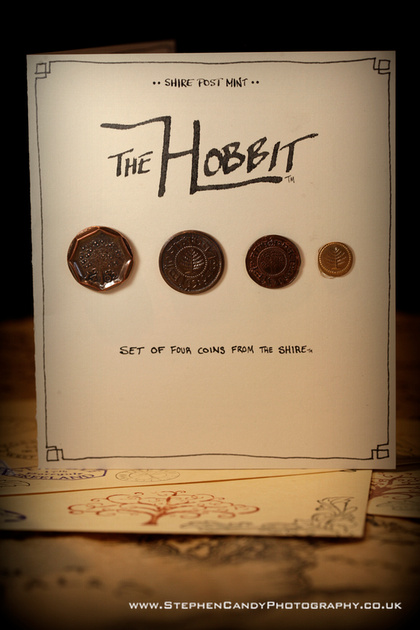 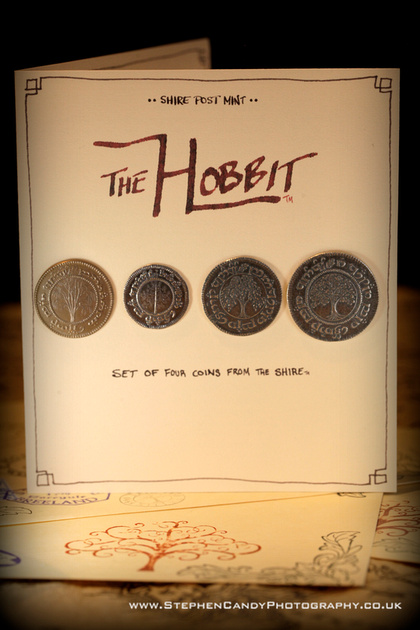 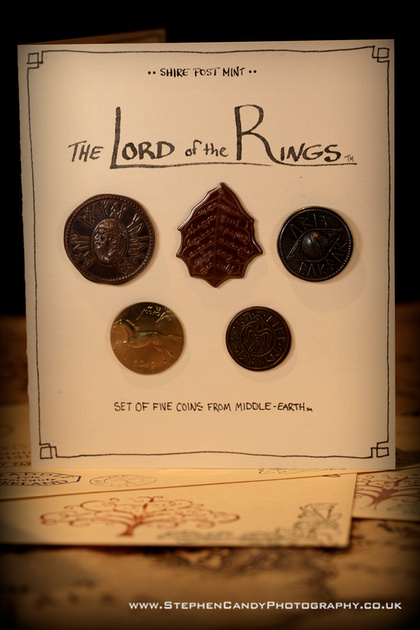 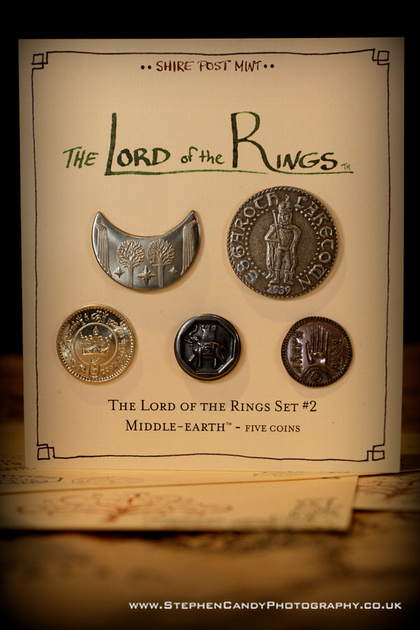 It’s worth noting that many of the Shire Post coins are also available as necklaces, such as this Elvish Leaf in solid niobium. (Pictured with the Noble Collection Glamdring sword letter opener.) 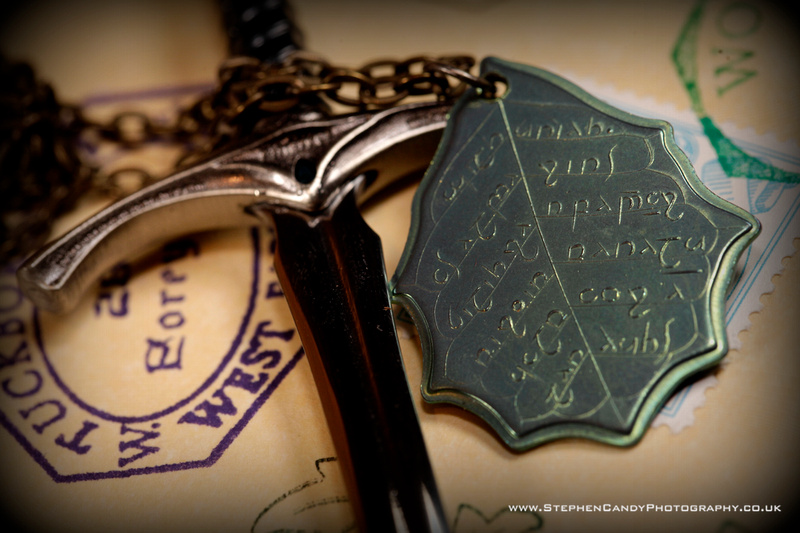 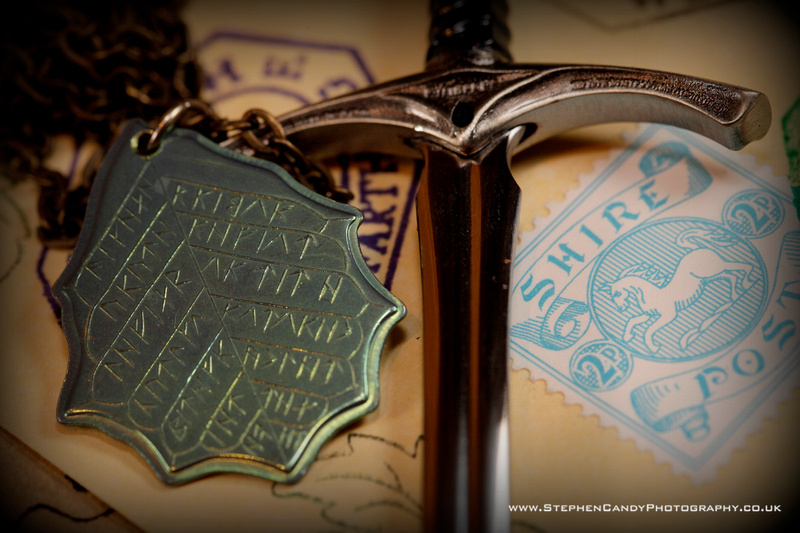 Shire Post also put lovely touches to the presentation of orders they send out – a special custom envelope to hold your coins, with an appropriate wax seal. Shown here with the Gondor Crown in niobium (left) and silver next to the seal. I really recommend a visit to their website to see their wares. 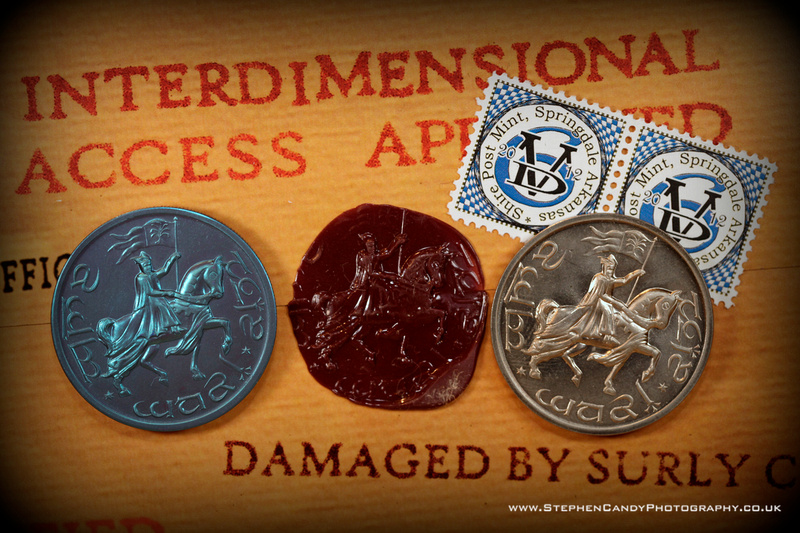 Over the coming weeks I will be sharing more freshly taken photos, some of them featuring items from this teaser image below. (How many different "worlds" and creators can you spot?) If there are any items you’d like to see me photograph please do get in touch as I’d very much enjoy some interaction over the coming year of photos! 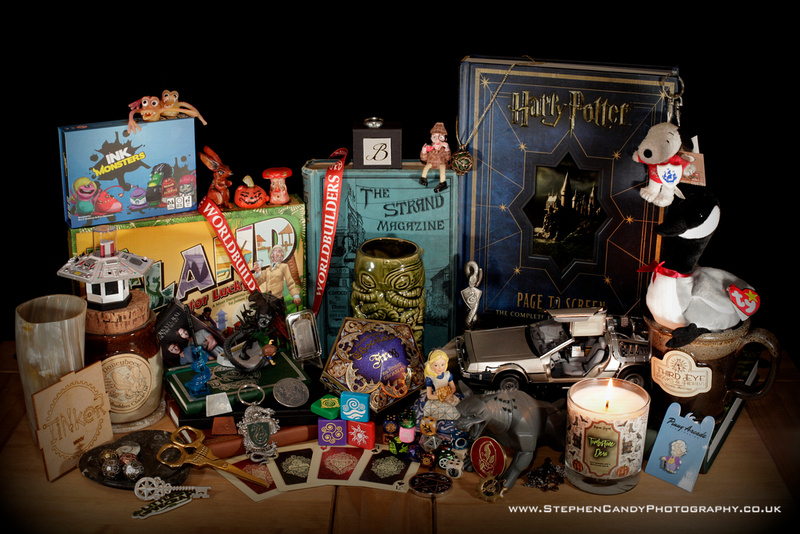