New Blogs for 2019 No.6 - Slytherin Celebration 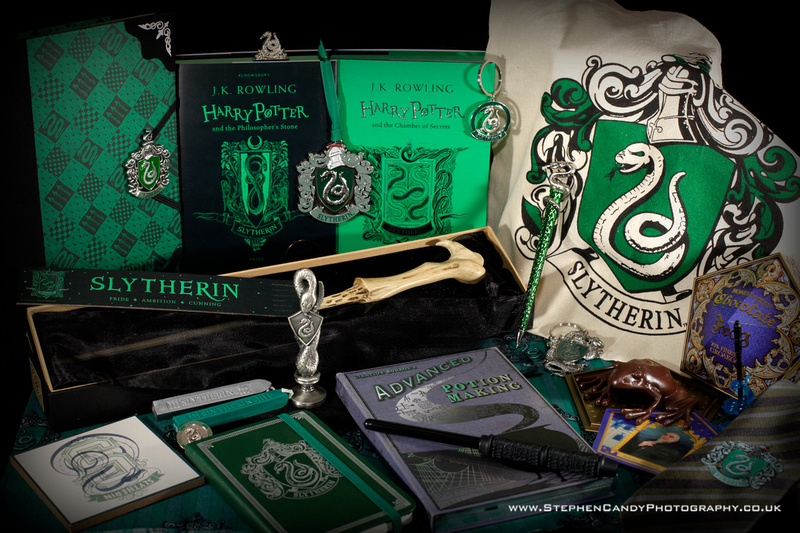 This week it was Harry Potter’s birthday! (Or, at least, the day on which it is said he is born in the hugely successful books by J.K. Rowling.) The publisher of the books hold an annual “Harry Potter Book Night” every 7th February to celebrate this, with parties, book readings and other events held across the world. (I even indulged in some Potter-ey fun myself with one of my special needs photography classes at QEII School in Horsham.)

This year was the fifth year the event has been held and the theme was “Hogwarts” (the wizard school Harry attends and the location for almost all the adventures in the books and films.) Famously, the school divides its students into “houses” in a manner not unlike many real schools, although the sorting process in the real world probably has more to do with class logistics, spreadsheets, pastoral staff availability and surnames than a magical talking hat. I thought it would be a good time to celebrate “my” house, as I am sure that if I attended Hogwarts I would be sorted into Slytherin. Despite Harry’s own cries of “not Slytherin” when he took his turn to wear the sorting hat, I don’t think this is anything to be ashamed of. A bit of “Slytherin pride” is in order. Schools in the real world don’t sort their students into houses based on seemingly astrological personality types and I don’t really believe that a magical wizard school would sort their students seemingly into “heroes” “baddies” and “the other ones who make up the numbers.” I suppose I should concede that Hagrid’s statement that “there’s not a single witch or wizard who went bad that wasn’t in Slytherin” paints them in a bad light and the fact that the house’s founder Salazar Slytherin was clearly something of a Muggle-hating extremist also doesn’t help (although he still commands enough historical respect to get his own card inside chocolate frog boxes!) 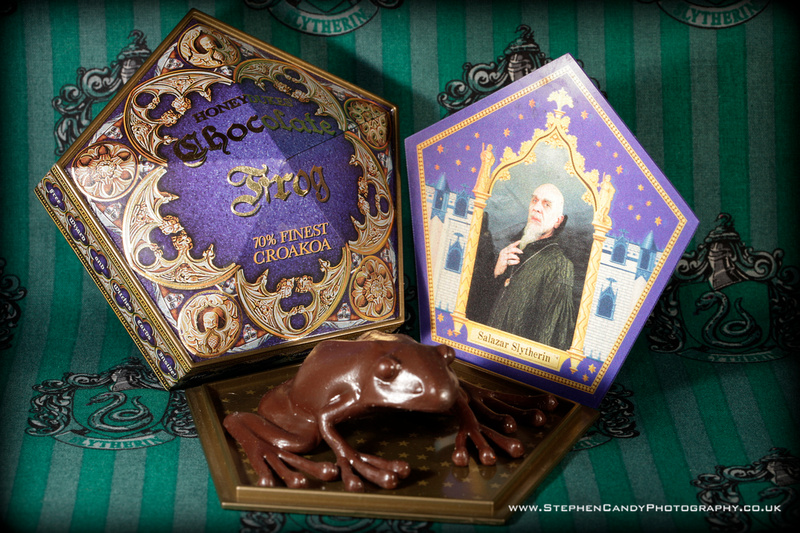 In favour of the house, however, is the fact that no less a wizard than Merlin was a member and in fact the characteristics prized by Slytherin of being ambitious, shrewd and cunning are ones that can be seen in many famous and successful people in all walks of life. The books and especially the films portrayal of Slytherin as “the baddie house” is, I suspect, one of narrative convenience and doesn’t reflect how things would really be in a school as wonderful as Hogwarts. (No, I’m definitely not taking a pretend magic wizard school too seriously, I don’t know what you mean.)

Harry Potter fans take the issue of which house they’re in very seriously and there are a variety of online “sorting” quizzes you can take to find out where you’d be if you were at Hogwarts. (If you're curious, you could try this one on Pottermore, but you need to create an account there first. Otherwise Google will find many unofficial alternatives for you.) Typically Gryffindor is the most popular, especially amongst younger fans, since it is Harry Potter’s house. In recent years Hufflepuff has risen in popularity due to the more recent “Fantastic Beasts” films having a hero in Newt Scamander who is from that house. Fewer people are likely to pick “the baddie house” as their choice though, unless they’re a bit more open minded about things. Whenever I’ve visited Warner Brothers Studio Tour, I’ve always been the only one to cheer when the guide says “anyone here from Slytherin?” I make sure to cheer extra loud too!

Whereas in the earlier days of Harry Potter merchandising, everything tended to be focused on Harry himself and Hogwarts items tended to be generic or with Gryffindor as the only option. These days, though, there are lots of items available to fans from all four houses. Naturally my collection tends towards Slytherin. 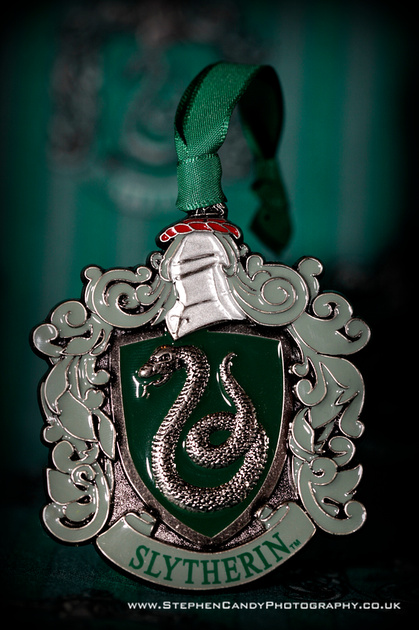 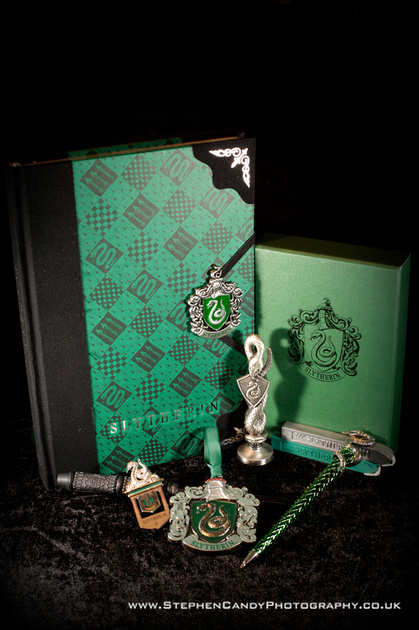 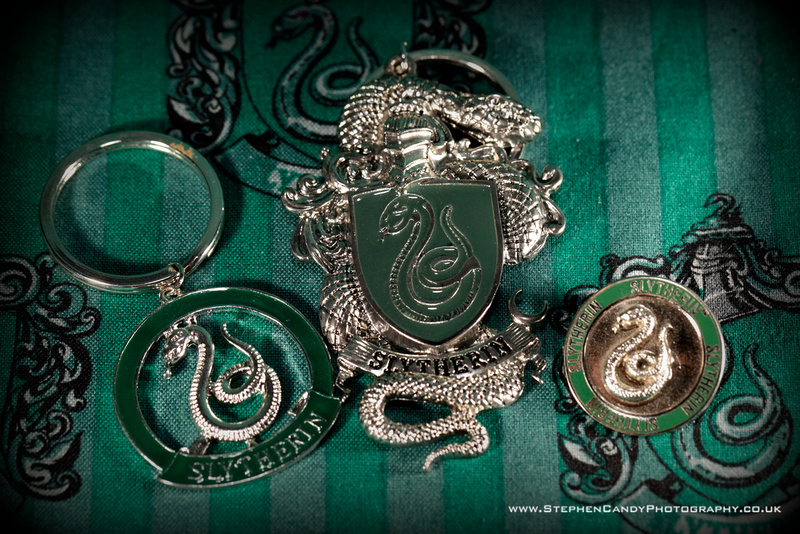 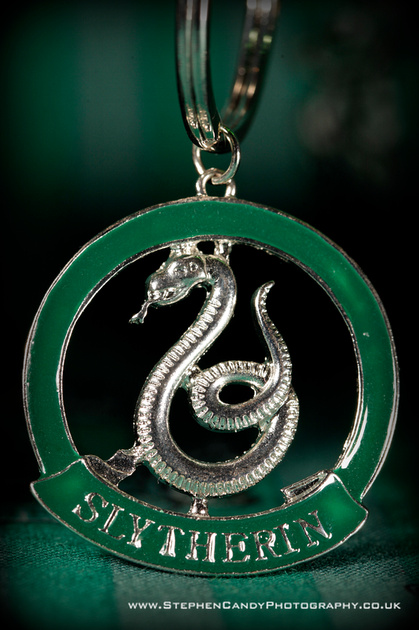 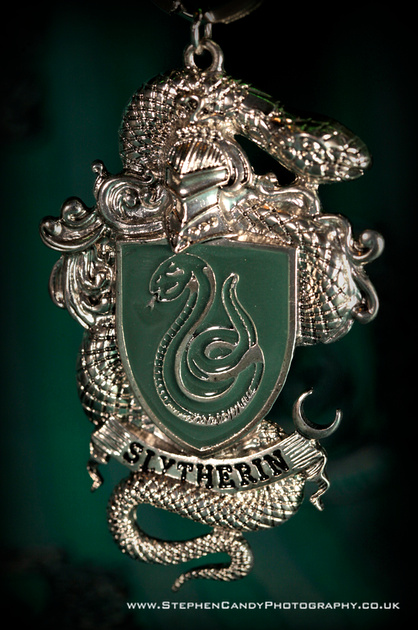 Many of these items are made by master creators The Noble Collection, whose wand replicas are perfect recreations of the items you see in the films and who offer a number of exciting Hogwarts-house themed items.

Slytherin wizards are represented in the recent “blind box” metal wands from Jakks. I am not a fan of blind-boxed items on the whole. Trading card swaps are one thing, but having to make multiple purchases of items costing several pounds in order to complete a set is something I think is a bit unfair when there’s no guarantee of getting a complete collection and not simply frustrating duplicates. (I don’t like the artificial rarity that is prevalent in many “collectors” or “limited edition” items either, but that’s a topic for another time.) Recently several high street stores have had these wands on heavy reduction in their post-Christmas sales so a few of them have snuck into my collection… 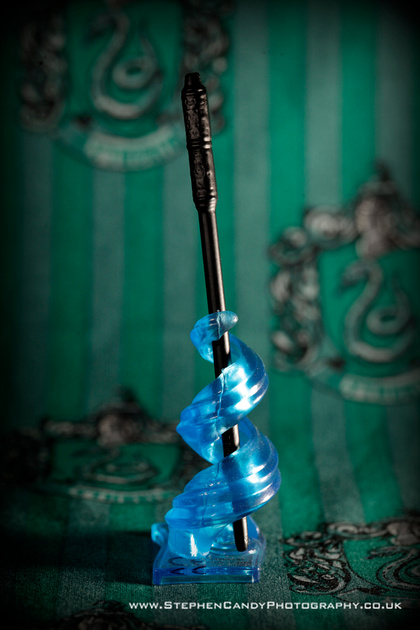 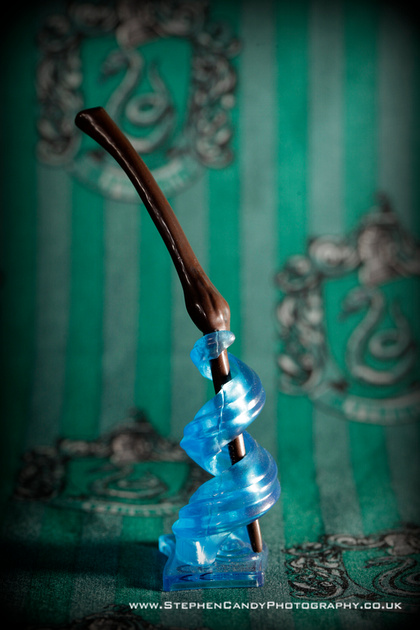 It isn’t completely necessary to purchase high-end replica items though. There’s a good selection of bargain Slytherin items available from stores such as Primark and even Poundland! Even the Noble Collection are good at having items that are affordable and practical, such as the magic wand pens and Hogwarts house pens. 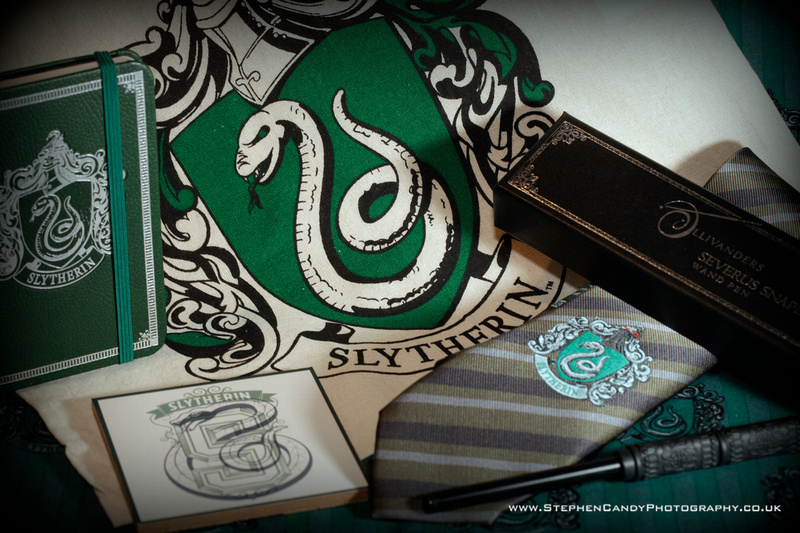 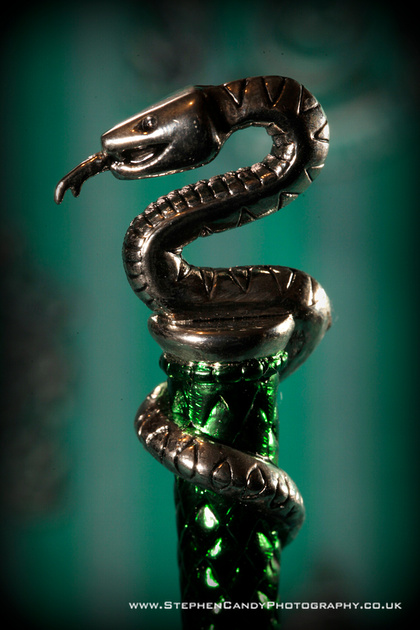 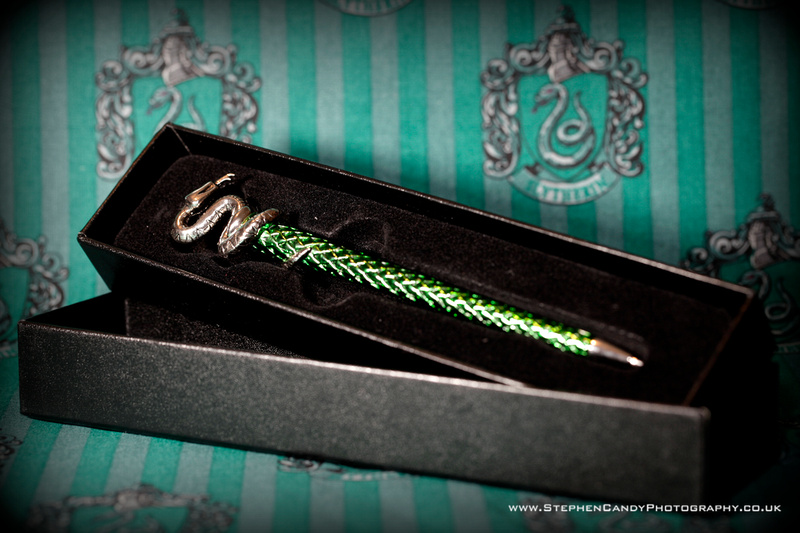 My Slytherin tie goes very well with my house robe, which was made-to-measure for me by the lovely Emma of Pleated Rose. Getting my own robe was a bit of an indulgence but I am delighted to have it. (The pin badge you see on the robe is from J.K. Rowling’s Lumos charity.) 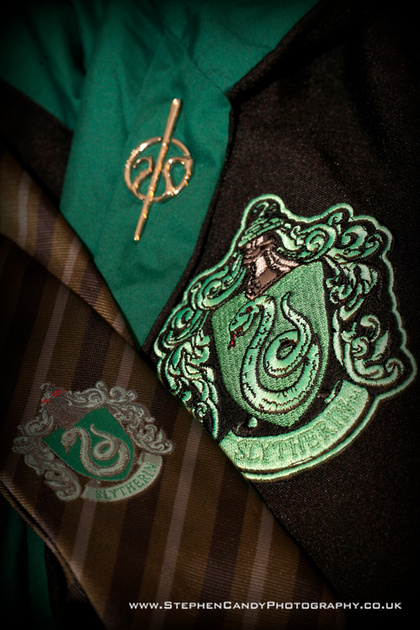 While the Noble Collection have a set of amazing Hogwarts House notebooks available, with detailed metal house logos on the cover, there are also simpler notebooks such as the smaller one seen here from Insights that I picked up in Waterstones. 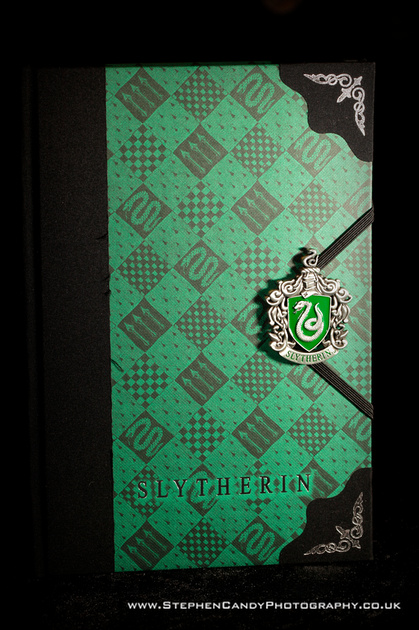 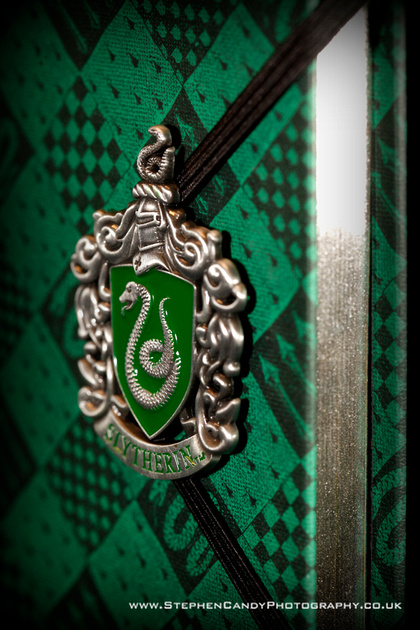 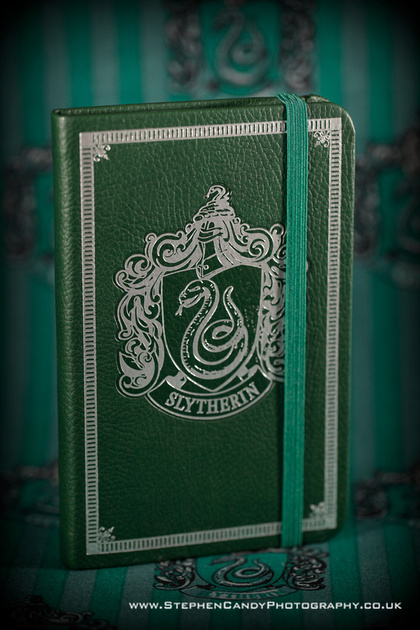 Of course, if you’re looking at notebooks, there’s also this stunning replica of “Advanced Potion Making” from MinaLima, a copy of their design from the films. A book that plays a key role in the books and films, as the property of none other than the Half-Blood Prince himself, Slytherin head of house (and later Hogwarts headmaster) Severus Snape. 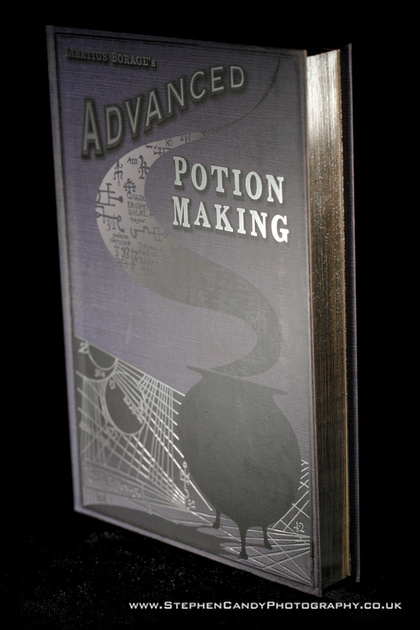 Bloomsbury have made the most of the following that each house has with the 20th Anniversary editions of the Harry Potter books that they have been releasing. Each house’s edition has its own custom colours, page edging, artwork and unique introductions with specific house facts. I am looking forward to getting the latest re-release “The Prisoner of Azkaban” later this year. 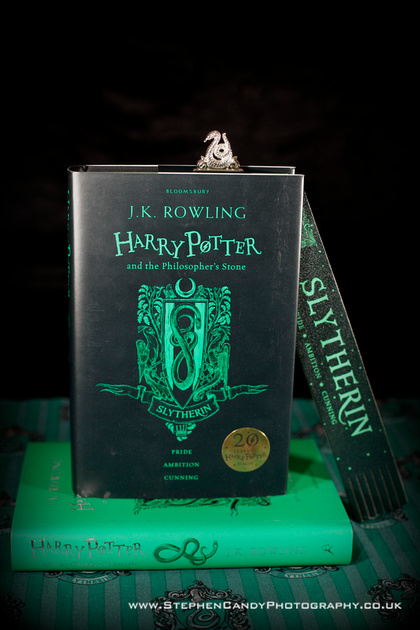 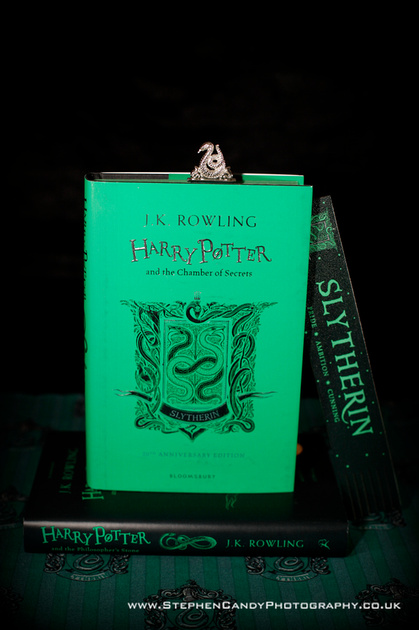 One of my favourite items (again from Noble) is the Slytherin wax seal set. There’s something special about writing an actual letter and then sealing it with wax, it’s so far removed from sending an email that I find it intriguing and exciting! This set lets you apply a Slytherin House seal to your letters before you give them to your owl to deliver. 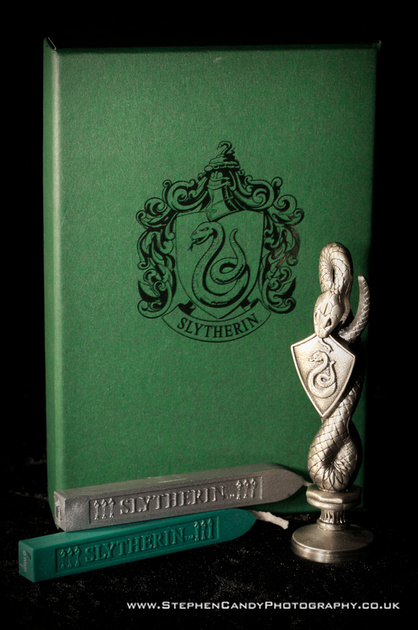 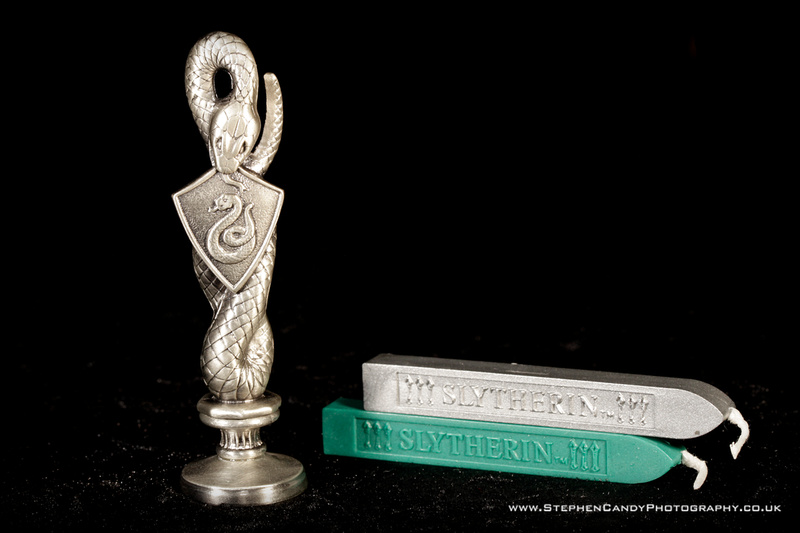 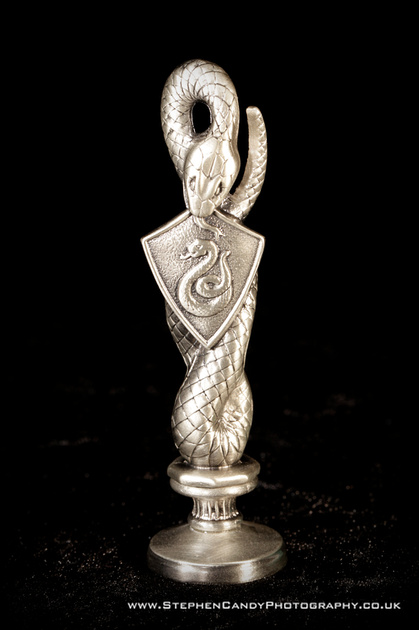 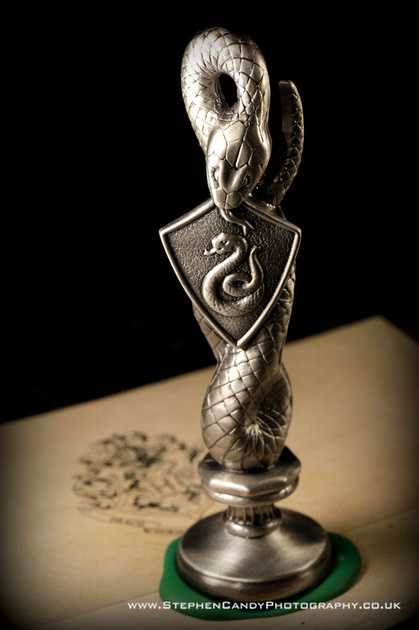 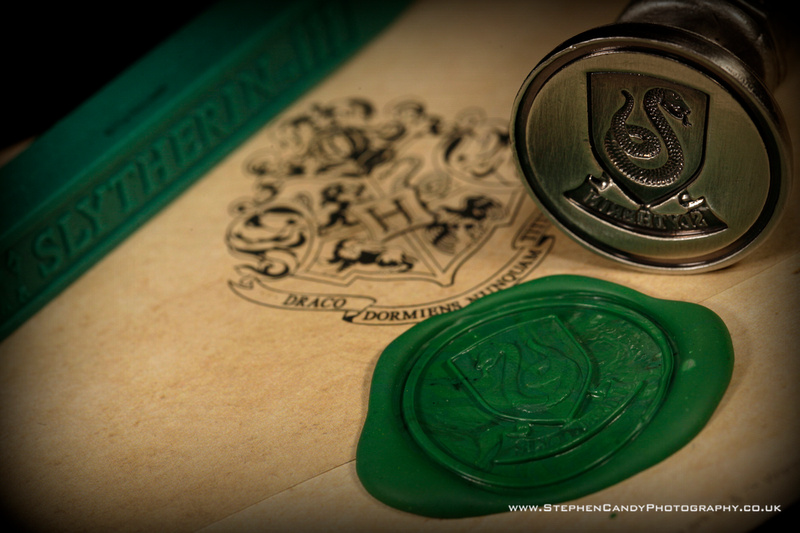 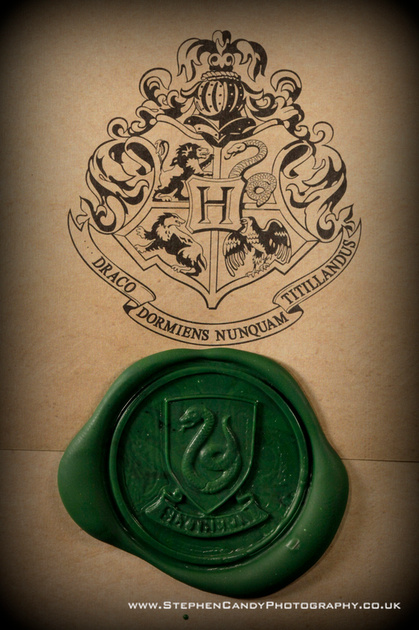 Finally, I can’t talk about Harry Potter without mentioning the truly amazing shrine to the series that is Oliver Dall’s shop in Brighton. The Warner Brothers Studio Tour is the number one place to go for fans of the books and films, but if you want the experience of shopping on Diagon Alley, I would say that going into Oliver’s Brighton is the closest you can get! The whole shop is appropriately themed and stocked to the rafters with Harry Potter items large and small (from the smallest chocolate frog to the biggest, shiniest – and yes, priciest – prop replica.) Oliver and his team are always really friendly and make shopping there a truly fun experience, plus the shop has items to suit every budget. Even the most expensive items are competitively priced in this world of internet-price-comparison. (Lots of the items in this blog came from the store, plus others that will be sure to feature in future weeks...)
If you’re a Potterhead and find yourself in the South of England, make sure you pay him a visit. 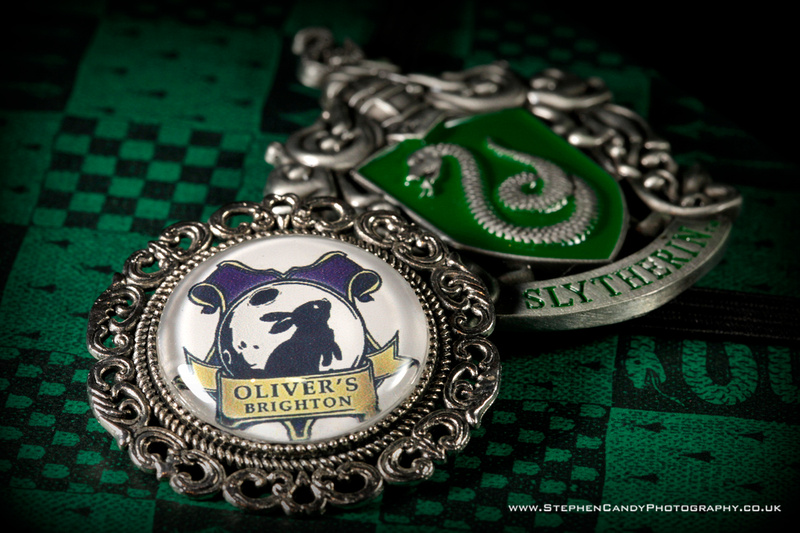